Your long jump technique decides between success and failure. To the casual observer, long jump is just a basic track and field event. The athletes run towards a takeoff board, and then jump into a sandpit as far as they can - how difficult can that be?

Well, even a simple long jump involves the athlete coordinating some very intricate movements in an effort to employ a successful technique.

If you observe the laws of physics, the distance traveled by any object depends upon its velocity and angle trajectory at the instance of take-off. The more successful jumpers generally leave the ground at an angle that is between 20-22 degrees while traveling at a speed of between 10.5 and 11 meters per second. The more velocity the jumper has at take-off, the longer the potential flight path and distant jumped.

There are 3 elements to every successful long jump:

Takeoff speed is an important element for successful long jumping. If you want to be able to run quickly, you need to be strong and explosive. The long jump approach run should be designed in such a way that it brings you to the takeoff point accurately and with the highest possible speed.

The run way is divided into three phases. The first of these is call the acceleration phase. Its length is about 6-8 steps or strides. 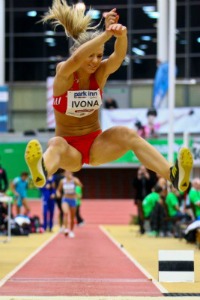 The next phase is referred to as the alignment phase. This is the phase where the jumper attains maximum or close to maximum speed. This phase is then followed by what is called an attacking phase.

This phase is characterized by a shortening of the running strides and an increase in the stride frequency over the final six steps of the run. All long jump run ups should have a rhythm and a structure, by that I mean that the jumper will begin the run relatively slowly and build on the speed until they are at their fastest controllable speed just prior to takeoff. You should maintain an upright posture going into the takeoff and maintain your speed until you have left the ground.

Consistency is the key to an efficient run up and so you cannot sacrifice accuracy for speed- they are both required. This is very important if you want to achieve a successful long jump.

As the jumper approaches the takeoff point a number of things must be done to achieve an effective and explosive takeoff. In the second to last stride you should lower your center of mass (CM) this prepares you to convert horizontal velocity (gained on the run up) to vertical velocity which is the takeoff itself. The plant for the takeoff is achieved by placing your foot on the takeoff board heel first in a gripping fashion.

The impact of hitting the board from a fast run will cause the leg to flex slightly but as the hip past over the foot you should extend your hips as powerfully as you can to launch yourself into the air. These final 2 strides are the key to successful long jumping as they determine the takeoff angle and the velocity you have as you leave the board. This in turn will dictate how far you will jump.

As soon as the long jumper leaves the ground following the takeoff, the body will begin to rotate around the transverse axis, this is referred to as forward rotation and will cause the athlete upper body to nose dive and in doing so, cause the feet to drop into the sandpit prematurely.

The whole purpose of the technique that you use during the flight phase of the long jump therefore is to minimize forward rotation so that you can maximize your landing distance. In elite level long jumping there are two main flight techniques that are used to overcome this rotation issue, the ‘hitch kick’ also referred to as the running in the air style and the ‘hang’.

From "The Best Long Jump Technique" Back To "Faster, Stronger, Better – Your Shortcut To Improved Athletic Performance"